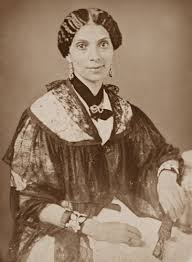 Mary Peake herself. A lovely and brave woman.

When The Preacher’s Promise made the semi-final cut last fall in the “So You Think You Can Write” contest, I put up a series of blog posts that discussed the origins of the idea.  You can see those posts here:

Harriet Jacobs: A Worker for the People

Freddy was a Rock Star

Now that the story has made the quarter-finals of the Amazon Breakthrough Novel Award contest, I see there is a need to write a few more posts about the origins of the story, since, given some of the comments in my reviews, some people may not know the history.  I’m not of the mindset that the people who read the excerpt of The Preacher’s Promise are also reading my blog. However, if they do decide to search the premise on Google, I would like to think that disseminating some of this information may help them and other potential readers better understand a time period and a history that they thought they knew.

Amanda arrives in Milford after the Civil War.  Some real-life African American teachers were willing to take their lives and liberty into their own hands to teach the still enslaved populations how to read and write before the war ended. One of these brave people was Mary Peake.

Born of a free mother and an Englishman, Peake started a school in her own home state of Virginia on the grounds of what is now Hampton University.  She started the school after her own home had been burned by Confederate forces.  Finding herself displaced, she taught the enslaved people who had gathered at Fort Monroe.  She had taught out of her home for years and now brought those skills to this new endeavor with purpose. The population of the school went from six to fifty within a matter of days.  Remarkably, Peake was also working as a married woman, having married Thomas Peake, one of the formerly enslaved.

Unfortunately, the next year, Peake caught tuberculosis and died.  Her endeavor may not have lasted long, but Peake’s school planted the seed of an idea that spread and motivated many others to leave the comfort of their lives and homes to help the enslaved.  We must remember that novels are written about the uncommon and the exceptional, and although we may not know her by name, Peake was certainly exceptional. Her accomplishments should be remembered and commended.

3 thoughts on “Could Amanda Stewart have existed? Another look at the sources for The Preacher’s Promise”